How Neurofeedback can help with Post Traumatic Stress Disorder

This 2009 paper describes two more case studies – a Canadian veteran of the Bosnia conflict and a Marine veteran of Iraq, and includes SPECT scans of the brains of one of the clients showing changes in the brain before and after brain training:- 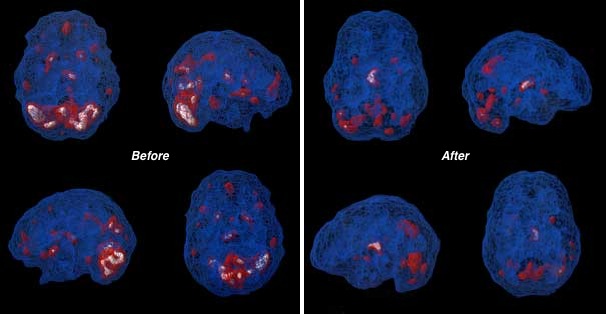 Othmer, S., & Othmer, S. F. (2009). Post traumatic stress disorder-The neurofeedback Remedy. Biofeedback, 37(1), 24-31. In the USA, a network of hundreds of Neurofeedback therapists are now offering treatment to US Veterans under the banner Homecoming for Veterans.

This video explains more about Neurofeedback and PTSD:

The objective with Neurofeedback training for PTSD/Developmental Trauma is the same as that for psychotherapy or EMDR – to process the trauma so it no longer affects you in the same way.  The difference is that Neurofeedback offers a way to do this without having to talk about uncomfortable feelings or reliving them.

Neurofeedback training for PTSD would start with a training protocol to calm the client physically and mentally. We would then move onto what we call Alpha-Theta training (as described in the study above) which encourages the client to enter a very relaxed state. In this state, memories of the trauma (whether consciously remembered or not) are processed so they no longer have the emotions usually attached to them, and the memory is ‘reprogrammed’ as a historic one.

The number of sessions required would depend on the severity of the symptoms and how well the client responds to Neurofeedback, but we would recommend 20 sessions.

What is Post-Traumatic Stress Disorder (PTSD)

PTSD is an anxiety disorder caused by being exposed to a traumatic event, which is then often relived after the event, with feelings like guilt, isolation and irritability, difficultly sleeping and concentrating. Various events can lead to different traumas. From being bitten by a dog, an accident, to war, working as first responder collecting human remains or police officers repeatedly exposed to details of child abuse. What these events have in common, is that each person is ‘exposed to actual or threatened death, serious injury or sexual violence’; one of the criteria of a Post-Traumatic Stress Disorder (PTSD) diagnosis. The DSM-5 provides additional information regarding this criteria:

What About Complex PTSD (C-PTSD) ?

Complex PTSD isn’t a formal diagnosis yet, it is under review for ICD-11 (the 11th Revision of the WHO International Classification of Diseases).

For trauma that occurred in childhood or adolescence it is also known as Developmental Trauma Disorder, a term coined by Bessel van der Kolk who has long campaigned for such a diagnosis to be recognised and who is an ardent promoter of Neurofeedback for trauma, or Complex Trauma.

You can find an excellent description of Developmental Trauma created by  Beacon House here.

It is different from so-called ‘simple’ PTSD in that the patient has suffered long-term traumatic stress, which could include sexual abuse (especially child sexual abuse), physical abuse, emotional abuse, domestic violence, torture or psychological torture. Trauma at a young age can also disrupt normal brain development.

Neurofeedback is particularly suitable for Developmental Trauma or C-PTSD with protocols to both process the trauma (whether consciously remembered or not), and improve brain regulation to address the long-term symptoms of trauma, such as hyper-vigilance.

At BrainTrainUK we have extensive experience working with adults and young people with Developmental Trauma.

It’s quite normal to experience some of these symptoms when you are exposed to a traumatic event, but usually they subside. When they continue for more than a month a PTSD diagnosis may be made.

It is believed that PTSD symptoms persist when the sufferer has not yet come to terms with the emotions the initial trauma caused.  Because the memories and emotions can be strong and painful, it is natural to want to avoid them, especially for people who are not used to or comfortable with acknowledging their emotions. But the further they are pushed away, the worse the PTSD will get. By coming to terms with the trauma you can also regain your sense of control so that the memories of the trauma are no longer controlling your life.

Effective approaches to PTSD/Developmental Trauma can include talking therapies to help you to come to terms with the trauma. However, for many people who have suffered trauma, talking therapies are not suitable. This may be because they have no conscious memory of the trauma, so they can’t talk about them, even though their unconscious or bodies have stored them (as described in The Body Keeps The Score). Or they may find that to think about the trauma, never mind talk about it to a stranger,  is too overwhelming to contemplate. Teenagers very often find it hard to talk about difficult subjects with anyone, never mind a stranger, and won’t engage with talking therapies.

Neurofeedback overcomes all of these issues. Whatever the trauma, we don’t need to know the details, and the client doesn’t have to know, think or talk about the details either.  Often clients who were previously unable to contemplate talking therapy, after having neurofeedback they are able to have talking therapy and find it helpful.

Other techniques to deal with PTSD are to process the trauma so that it no longer has the same triggering effect. The best treatment for PTSD helps you to come to terms with the trauma, usually through psychotherapy. Another technique that is relatively new in the UK is Eye movement desensitisation and reprocessing (EMDR), which involves moving the eyes from side to side whilst reliving the trauma. It is believed that the distressing memories are ‘frozen’ on a neurological level, and the therapy ‘unfreezes’ the memories by unblocking the information processing system. The technique sounds simple but EMDR therapists need a high level of skill to help you through the process. Sometimes antidepressant medication will be prescribed to help with the symptoms, but it is acknowledged that this will not address the root causes of the recurring PTSD symptoms.

Call us today to discuss how Neurofeedback could help PTSD symptoms.